According to the wise words of Margaret Mead, it is through small groups of thoughtful people that we can change the world. In line with this thought, group and group dynamics have had a lot of impact in African ASAL (arid and semi-arid lands) Communities by making them grow and develop economically while utilizing the minimal opportunities in combating poverty and effects of climate change. Groups, ranging from chamaas, Savings and Internal Lending Communities (SILC) groups, Saccos, producer groups, and Cooperatives, have become great giants in steering the economy of communities in ASAL areas in West Pokot County in Kenya. However, developing and sustaining these autonomous groups has been more of a fairy tale than the reality.

As narrated by Cheptoyo Matan, Simbol Pastoralic Secretary , the idea of managing groups was a challenge, “ombo tuyot nyo po tagh kishalacha nyoman ombo wolo ata chii nyo kichamei le me karam nye nyoliontenyi’ meaning, during the first meeting, there was a lot of conflict because no one could accept that his or her idea was wrong.
In another incident Samuel Lotireng’, of Masol group, explains how elections and leadership wrangles almost costed the existence of the group and even his life. “Ki korom aswaa nini” (It was so hard that time). As he continues, Samuel says that his teammates believed in the old thinking that elections can just be done with one single meeting and consensus arrived at on who their leader should be. Understanding of groups and their dynamics is increasingly becoming an important ingredient in their success. However, Ngirotiang, a member of Simbol Pastoralic, recalls how tough it was understanding the dynamics of their group during the early stages. He says, the group was existent but they couldn’t fully leverage on the value of teamwork. 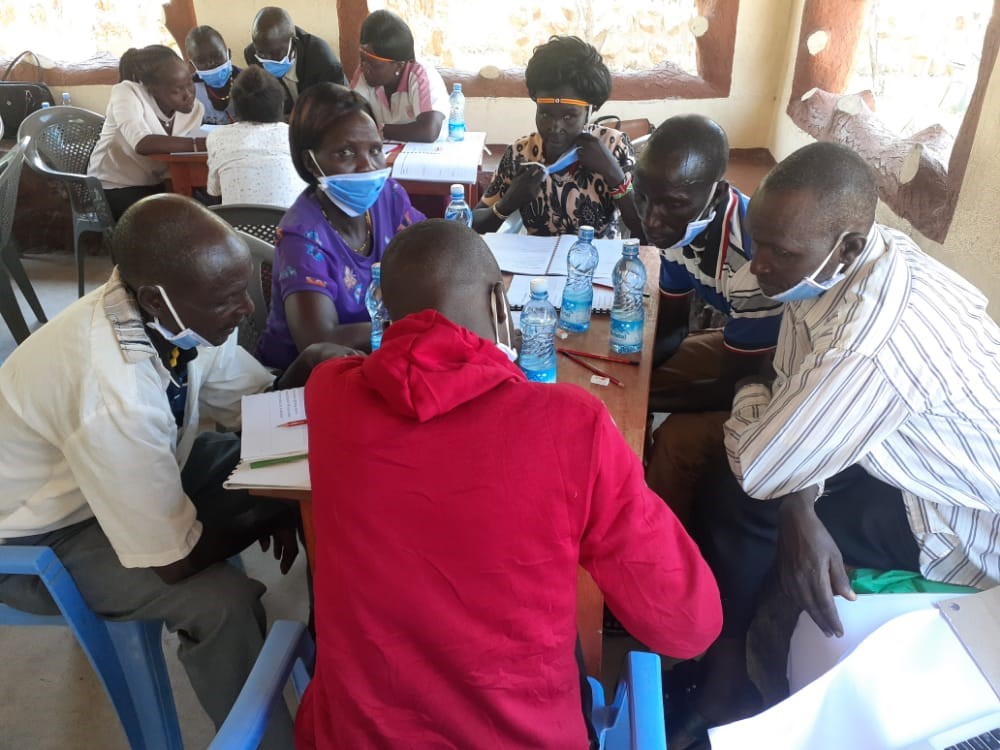 Through a European Union funded project called “Support to Resilience for Sustainable Livelihoods” in Kenya’s West Pokot County, E4Impact Foundation, in partnership with other institutions, delved on these gaps to ensure effective formation and excellent performance of groups. The first step was to strengthen fodder groups through group management and dynamics training and later use them to scale up viable business models while linking them to markets.

Group dynamics outlines social processes which people in a group should create a positive working environment. In a group where the structures are poor, people’s behaviors disrupt activities and thereafter affect the overall performance. E4Impact established the need for team building in both Simbol and Masol groups, with which it is working within the EU project. The purpose was to improve teamwork and performance of the fodder groups in production and marketing of produce. An example of how E4Impact operates can be seen in the group dynamics training organized in Tikit.

In the first week of September 2020, the long-awaited intervention landed in the deep valleys of Masol and Simbol. Simbol fodder group was in a devastating state since the group had already been extinct and Masol was at the verge of collapsing. E4Impact quickly intervened and ran rigorous three-day training on group dynamics.
On this boot camp, E4Impact introduced the concept of group dynamics and then took the groups on ways of forming effective groups. Group constitution and management was found necessary in order to strengthen the groups and ensure sustainability. Over the three days, E4Impact covered other elements including group leadership and decision making, conflict management, group communication, meetings, record keeping, financial management and entrepreneurship. Case studies were regularly employed to relate what Simbol and Masol groups were facing to what their peers were facing elsewhere.

Now, light started shining and a new chapter began. Simbol and Masol transformed from lack of a group constitution and teamwork to conducting elections in an organized, coherent, and systematic manner.
As the training came to an end, Lopetareng’ the chairman of symbol group testified that the teachings identified their challenges, and he was willing to be part of the change. “Sere nyo wow akwa monechu, groupto nyo kinget nyoman ombo kinetat netee aa kepetecha ketesee tagh’ meaning this training has really helped us and we commit to take heed of the teachings.”

“Support to Resilience for Sustainable Livelihoods”  is a project, funded by the European Union in Kenya’s West Pokot County. It is implemented by E4Impact together with CEFA Onlus, Northern Rangelands Trust, Amref Health Africa, and Somirenec.

Ben Ncube: a clinic for men in Zimbabwe